(HBO) – As part of efforts to implement the Resolution of the communal Party Congress in the 2020-2025 tenure, the Party organisation of Xuan Thuy commune in Kim Boi district has built four action plans. According to Bach Cong Luong, Secretary of the communal Party Committee, the action plan on building a strong political system is the most important, contributing to completing socio-economic tasks of the locality. 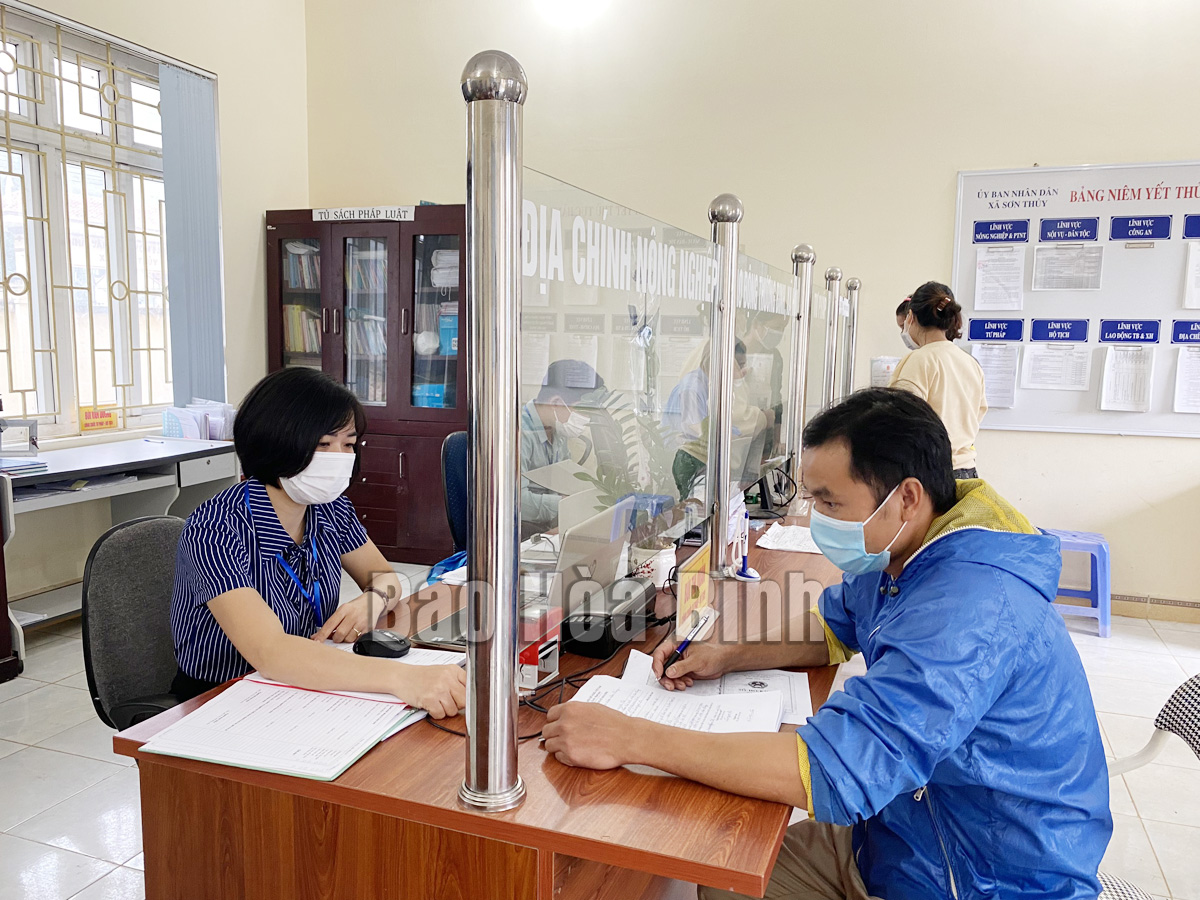 Photo: Public servants in Xuan Thuy commune (Kim Boi) have worked to improve their service quality, contributing to building a strong political system.
Xuan Thuy Party organisation currently has 503 members in 20 Party cells. From the beginning of the tenure, the communal Party Committee has issued many thematic resolutions to synchronously carry out measures to build strong Party, administration, the Vietnam Fatherland Front and socio-political organisations, focusing on strictly implementing the Resolution issued by the 12th Party Central Committee’s fourth session on Party building and purification and Directive No. 05 of the Politburo.
The communal Party Committee has concentrated on dealing with urgent problems right at the grassroots level to prevent prolonged petitions.In addition, the committee has focused on the improvement of the quality of officials and public servants, considering it as a key factor contributing to building a strong Party and political system. With the support of the communal Party Committee, currently, 100 percent of local officials and public servants have met qualification requirements.
The drastic reform in the leadership method of the communal Party Committee has been fruitful, creating positive changes in local socio-economic development, and bringing the resolutions of the Party Committees at all levels to life. Regarding economic development, all villages in the commune have actively encouraged local residents to switch to crops and livestock with higher productivity and economic value, and applying scientific and technical advances into production.
The total farming area of the commune has reached over 6,000 hectares annually. The commune has formed the Son Thuy agricultural service cooperative, which has 41 members, whose 34 hectares of longan have received food safety certificates by the Sub-Department of Plant Cultivation and Protection. In 2020, the commune's per capita income reached 24 million VND (1,058 USD) per year, while the ratio of poor households decreased to 9.99 percent. The percentage of cultured families reached over 80 percent, and 70 percent of residential areas were recognised as civilised areas. These results contributed to enhancing the confidence of local officials, Party members and residents in the Party's leadership, creating motivations in the renewal and development cause in the following years.
Bach Cong Luong, Secretary of the communal Party Committee said that with effective solutions and initial results in building a strong political system, the committee is determined to fulfill 100 percent of the targets set by the Resolution of the communal Party Congress, and strive to raise per capita income of locals to at least 52 million VND (2,284 USD) per year by 2025. The commune aims to raise annual state budget collection by 8-10 percent per year, reduce the ratio of poor households by 2 percent per year, and ensure political security, social order and safety. The Party organisation hopes to earn the title of "well performing Party organisation," he added./.