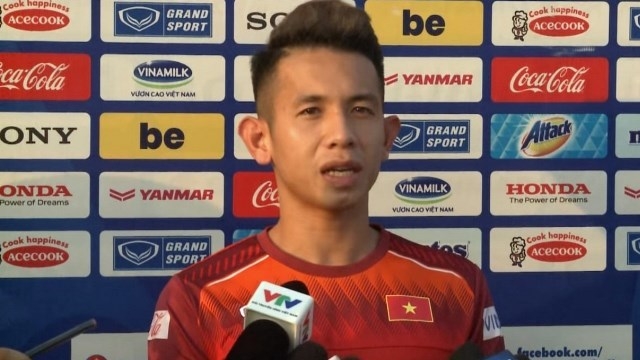 Defender Nguyen Phong Hong Duy has affirmed that the Vietnam team now are focusing to prepare for the upcoming match against regional arch-rivals Thailand at Hanoi’s My Dinh National Stadium on November 19.

Vietnam have extended their unbeaten run in the World Cup qualifiers to four matches and now coach Park Hang-seo and his players are full of excitement and confidence, but also remain focused on the upcoming important match against Thailand, who lost 2-1 to hosts Malaysia, also on November 14, and slipped to second in Group G, three points behind Vietnam.

Sharing with the press ahead of his training session on Saturday afternoon, left-back Hong Duy affirmed that the whole team had forgotten the win against the UAE and are currently focusing on the match with Thailand: "After the game with the UAE, coach Park Hang-seo praised us. We are currently sitting at the top of Group G but we have forgotten the match against the UAE and now only focusing on the upcoming match against Thailand.”

Commenting on the Thai team, the Hoang Anh Gia Lai FC’s full-back said: "Thailand are still a high-class team, so the upcoming match will be very difficult. We will try our best to concentrate on playing well.”

Hong Duy also pointed out the three most dangerous names on the Thai side that Vietnam must keep an eye on in the upcoming match: "The Thai team has Chanathip Songkrasin and left-back Theerathon Bunmathan who are both very classy. Striker Teerasil Dangda has also proved dangerous in several previous matches."

Given that the "War Elephants" have changed a lot compared to when they first met the Vietnamese team in the openers of the World Cup second qualifying round last September, the 1996-born player added: "Thailand have a good squad and are being led by an experienced coach, helping them improve a lot. However, we will work closely with the coaching staff to carefully analyse them and prepare well for the upcoming match.”

The Vietnamese team are confident with the top position in Group G before hosting visitors Thailand next Tuesday, November 19, 2019.

In the stalemate draw with Thailand at Thammasat Stadium last September, Hong Duy started from the beginning and played the full 90 minutes, while coming off the bench for the few last minutes in the 3-1 victory over Indonesia last October. Talking about his chance to be picked up in the starting lineup in the upcoming match, the defender, who was born in Binh Phuoc Province, said: "The decision on who starts will be decided by coach Park. I myself always try to practice and to be ready for whenever I am given the opportunity to play."

The 23-year-old also asserted: "We are a team so it does not matter who will start and who will be substitutes. I myself always encourage the whole team in all circumstances and hope to play for the best results with my teammates."

Thailand, three points behind Vietnam in Group G ahead of the match, are forced to win at My Dinh next Tuesday, November 19, 2019.

After a day off, the Vietnamese players returned to the training ground yesterday afternoon to prepare to face Thailand. The 1-0 victory over the UAE helped Vietnam secure the top spot of Group G with 10 points after four matches, while Thailand is ranked second, three points behind Vietnam. If they continue to win against the direct rivals in the next match, the opportunity to make history in qualifying for the final qualifying round of a World Cup for the first time ever for Vietnamese football will become extremely open for Park’s side. The confrontation between hosts Vietnam and Thailand will take place at 20:00 on November 19 at My Dinh National Stadium.