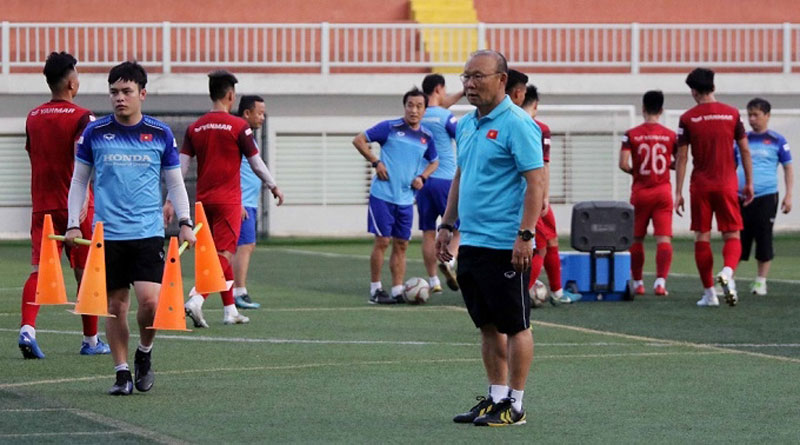 Head coach Park Hang-seo said he is fully aware of Vietnamese fans’ great expectations for the men’s football gold medal at the upcoming 30th Southeast Asian (SEA) Games, during an interview granted to the media ahead of Vietnam U22s’ training session on the afternoon of November 21.

After nine short-term camps, Park has now gathered his strongest force for the SEA Games mission. Accordingly, the Republic of Korea tactician has officially announced the final 21-man Vietnamese squad, including eight players who recently concluded the World Cup qualification campaign with the national team.

With each team being allowed to register two players aged over 22, Park has granted the chance to Nguyen Trong Hoang and Do Hung Dung, the two midfielders of the national team. Sharing about these choices, he said that Trong Hoang and Hung Dung can play in various positions, thus meeting his criteria.

Concerning the SEA Games gold-medal target, Park said he feels a lot of pressure as he knows the expectations of Vietnamese fans. However, he said it is also the goal his side are looking towards, affirming that he and his staff would try their best to make it come true.

With regards to the team’s leaders, the head coach has handed the armband to Nguyen Quang Hai, while naming Nguyen Tien Linh and Do Thanh Thinh as the two vice-captains. Explaining the decision, the tactician said Quang Hai previously did a good job when serving as the captain of Vietnam U23s at the 2020 AFC U23 Championship qualifiers, adding that Thanh Thinh and Tien Linh are the experienced players with strong voices in the Vietnamese team.

When asked if playing on artificial turf at SEA Games will affect Vietnam U22s, Park said that not only Vietnam, but also other participants will have to play on artificial turf. He admitted the artificial turf will remarkably impact the playstyle and skills of teams but affirmed that his side have already prepared for this.

Touching on Vietnam’s opponents at the upcoming Games, Park said he would thoroughly research them to make the best possible preparations.

As planned, Vietnam U22s will head for the Philippines on November 22 and will have three days to prepare for their Group B opener against underdogs Brunei.

Here following are some pictures of Vietnam U22s' training session on November 21.