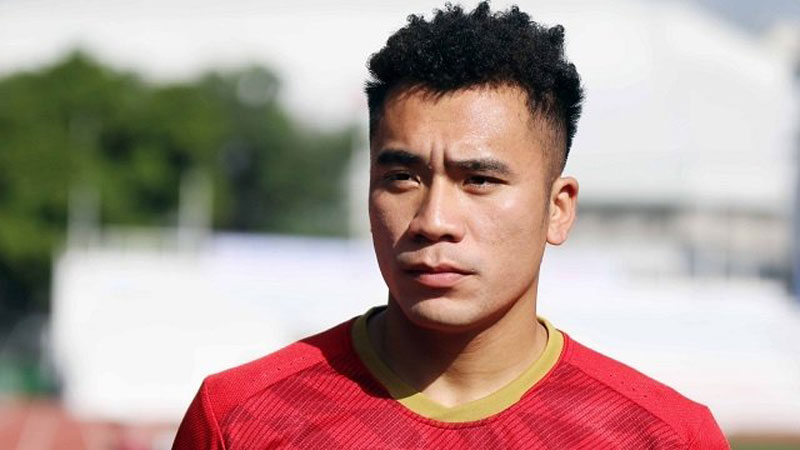 Defender Bui Tien Dung during a press interview before Vietnam U22s’ training camp in Manila, the Philippines on November 26, 2019. On the morning of November 26, Vietnam U22s returned to their training camp to prepare for the next match against Laos U22s in Group B men's soccer in the 30th SEA Games. After beating Brunei U22s 6-0 in their opener yesterday, Vietnam are in high spirits but defender Bui Tien Dung said that the whole team needs to focus more because the Games have just started.

Dung was giving his comment during a press interview before the training session. The 1998-born is considered as one of the important factors in the defensive system of Vietnam U22s under head coach Park Hang-seo. When he was still in Vietnam U19 squad, Dung's forte was as a central midfielder. However, in SHB Da Nang FC, he is often in the centre of the defensive line and has shown good ability. That is also the reason coach Park selected Dung for the SEA Games campaign because the Korean tactician always gives priority to the players with good physical conditioning and fitness and can adapt to multiple positions on the field like Dung.

With a fairly tight fixture in the group stage, Park will have to calculate to optimise the squad serving the long-distance race. Therefore, it is likely that Dung will be included in the starting line-up against Laos U22s in the next match, especially in the context that key defender Huynh Tan Sinh was injured in the match against Brunei U22s yesterday and is likely to miss two upcoming matches.

With a tight fixture at an average of one game per two days, Park will have to consider to keep his players in good form. Obviously, playing on artificial turf in this year’s SEA Games would cause higher risk of injury for the players and they must be very cautious in each situation, in order to minimise unnecessary injuries. This is also something that Park used to be very worried about when he shared about the schedule of the tournament.

Talking about his opportunities, Dung said: "The coaching staff will have to make suitable adjustments. After yesterday's win, the team’s spirit is very good, but we should all keep in mind that the SEA Games have just started and we need more focus. I myself always focus on practicing well and improving my ability to be always ready."

Sharing the return of striker Ha Duc Chinh, who had a poker against Brunei U22s yesterday, Dung said: "Chinh has four goals right in the first match. He has regained his instinct in scoring goals. This is also a great source of motivation for him to back to his top form.”

This morning, Park divided Vietnam’s squad into two groups, with the group of players against Brunei U22s only exercising and getting massages at the hotel. Meanwhile, the remaining players, including starmen Quang Hai, Hung Dung, Van Hau and Tien Linh were on tactical practice at the Rizal Memorial Stadium. In the next few days, the team will still practice in this stadium which is near their hotel, instead of moving more than 30 km to practice at Binan Stadium – the official venue for the next match against Laos U22s on November 28.

This afternoon, the whole squad rested and recovered at their hotel and tomorrow afternoon, the team will train again with the full squad to prepare for the match against Lao rivals.

Vietnam U22s players are actively training to prepare for the match against Laos U22s.

Defender Van Hau, who is playing in the Netherlands, during the training camp.

Despite their first victory, coach Park Hang-seo has affirmed that Vietnam need to focus more in the upcoming matches.

Key players including Quang Hai, Tien Linh, Hung Dung and Van Hau are receiving expectation from fans to shine to help Vietnamese football win the first gold medal ever in the SEA Games.