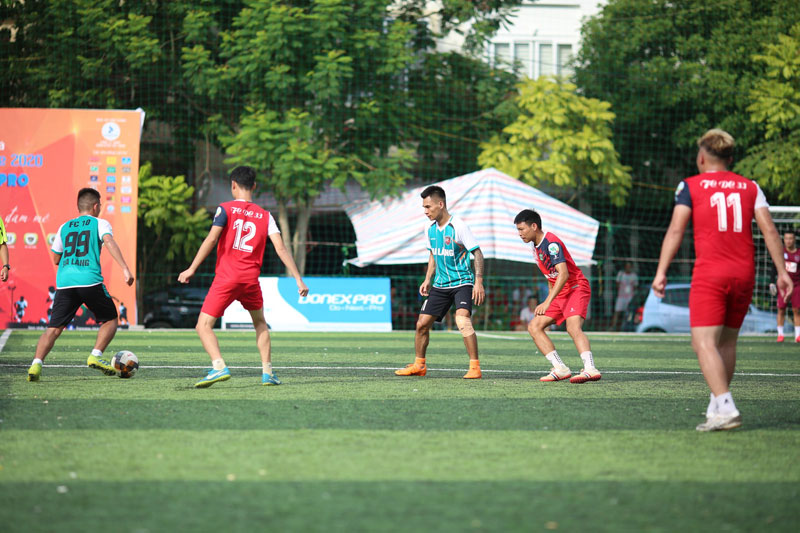 The match between Club 10 and Club DC 33 offers many interesting and dramatic balls.

The football tournament of Hoa Binh League 2020, Cup Donexpro was formerly known as the Hoa Binh Open Football Championship for the Youth. This is the sixth time the tournament is held to create a useful playground and to attract the participation of the football clubs in the province. With a round competition to find the team with the highest score, this year's tournament has gathered 10 movement football clubs with more than 200 athletes. In particular, many young players are still attending high schools in the province.

Mr.Nguyen Duy Tu, the Secretary of the Youth Communist Union of Hoa Bing City says: "This is the first year the Youth Communist Union of the City has cooperated with the Organizing Committee of the soccer tournament in Hoa Binh city to organize a football tournament. The purpose of the tournament is to create a useful playground for the youth members, promoting the movement of physical training and sports, improving health and combating the social evils. So as not to affect the study and work of the athletes, the matches take place at weekends, particularly on Sunday afternoons to create the maximum conditions for the athletes to arrange time to attend the tournament, and at the same time to attract football fans. Through that, it helps create the opportunities to find and foster the football talents to participate in competitions held in the province and the region.”

In recent years, the football movement in the city has strongly developed, attracting a large number of young people to participate in training. According to the statistics, currently there are over 20 football clubs in the whole city maintaining regular activities on weekdays. To prepare for this year’s tournament, the football clubs are planning to practice, focusing on the physical fitness and the tactical exercises. The forces have been added to improve the quality of the competition team.