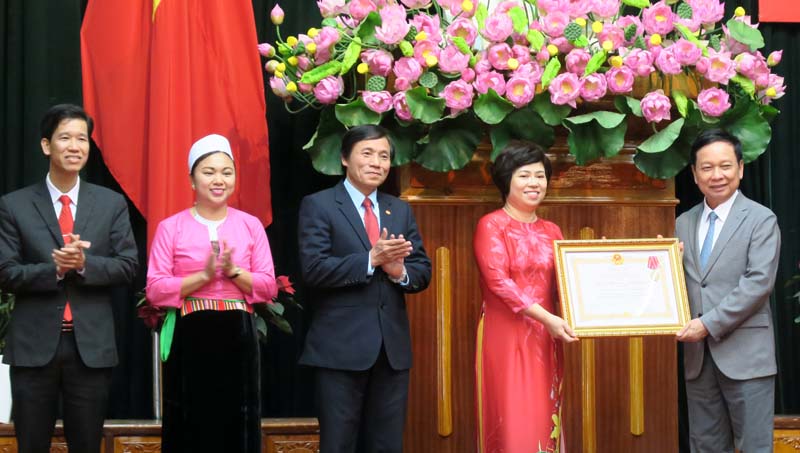 Accordingly, the Party, authorities, mass organisations, business community and people paid attention to stepping up emulation campaigns and pooling collective power of the political system, people from all walks of life and social forces. The emulation campaign "The whole nation joins hands to build new-style rural areas” for the 2016-2020 period, launched by the Prime Minister, has reaped positive results.

As of the late 2019, 19 communes met criteria for new-style rural areas, 9 higher than the target. Hoa Binh city has completed the task of new rural development. Luong Son district is completing dossier to submit to the Prime Minister to seek the status. The emulation campaign "The whole nation joins hands to build new-style rural areas, No one is left behind” upheld the role and responsibility of the community, contributing to poverty reduction.

The emulation movement "Vietnamese firms integrate and develop” inspired start-up spirit, innovation and dedication to the nation. Emulation movements, launched by the provincial People’s Committee, were welcomed by departments and agencies, becoming a regular and efficient task, contributing to accomplishing local socio-economic tasks.

As a result, last year, the province’s gross regional domestic product expanded by 9.05 percent while its State budget collection hit 3.64 trillion VND, or 118 percent of the Prime Minister’s estimate and 95.54 percent of the target set in the Resolution of the provincial People’s Council, up 7.72 percent year-on-year. The average income per capita reached 58.9 million VND.

The rate of poor households was reduced to 11.36 percent, down 3.38 percent from 2017. Socio-culture field saw new progress while national defence-security was maintained. The province completed a scheme on the arrangement of communal and district-level administrative units to submit to the Minister of Home Affairs and the Government.

Accordingly, the province is determined to improve business climate and competitiveness, effectively pool and use resources for rapid and sustainable development; develop industry, services and agriculture in tandem with new rural development and improvement of local lives. It strives to reach an economic growth of 9.5 percent, average income per capita of 64 million VND and export turnover of 1.032 million USD, as well as reduce poverty rate by 2.8 percent.

A number of outstanding individuals and collectives were honoured at the event. The provincial VFF Committee and four individuals received the second-class Labour Order, five individuals were awarded with the third-class Labour Order, one another received the Prime Minister’s certificate of merit, and the provincial Inspection Committee was presented with the outstanding emulation flag of the Prime Minister./.