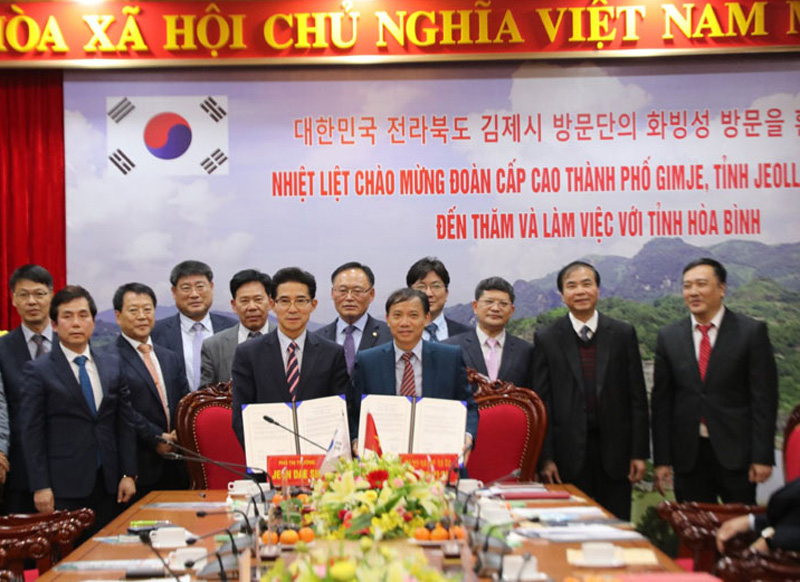 On the first days of 2020, local authorities hosted a reception for a high-ranking delegation from Gimje city, Jeollabuk province, the Republic of Korea.

At the working session, both sides signed an agreement on friendly cooperation and exchange between the two provinces, under which they will promote development via collaboration in science-technology, economy, education and culture based on the principle of fairness and mutual benefits. The two sides will actively work to conduct friendly cooperation projects and others.

The meeting made important contributions to expanding ties between Hoa Binh and Tuv provinces, in accordance with the memorandum of understanding on cooperation signed by chairmen of the people’s councils of Hoa Binh and Tuv provinces on January 22, 2018, in the fields of information sharing, agriculture, cultivation and animal husbandry, exchange of visits to share experience in fields of strength, science-technology, health care, culture-sports, and people-to-people exchange.

The standing board of the provincial Party Committee built a plan to implement the Secretariat’s Decree No.25-CT/TW dated August 8, 2018 on promoting multilateral external relations till 2030; raising awareness of the Party units, authorities, Party members and the public on the Party’s goals and stance on multilateral external affairs; reaching high consensus and determination on the field. The board also issued Regulation No.10-QC/TU dated September 17, 2019 on the management of external activities in the locality./.