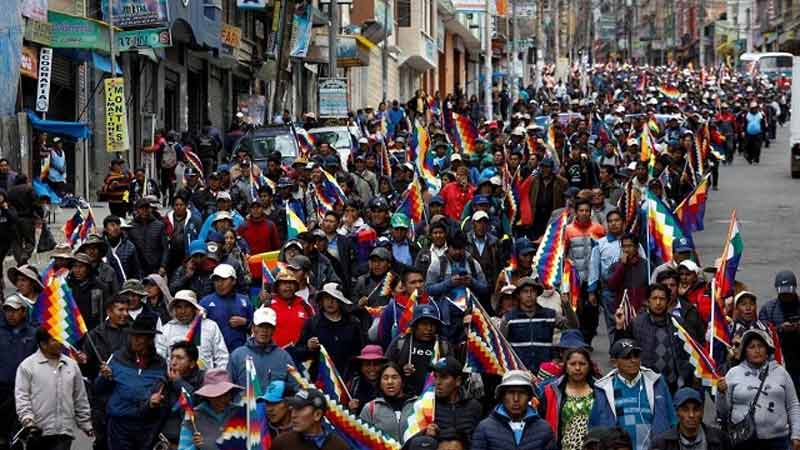 Vice President of Bolivian Senate, Senator Jeanine Anez was sworn in as Interim President of Bolivia on November 12, in the context of the country being in a serious political crisis after weeks of violent protests led to the resignation of former President Evo Morales.

Anez vowed to only assume the role of president in the process of reorganising the presidential election, reported Reuters and Vietnam News Agency.

On the same day, an extraordinary session of the Bolivian Chamber of Deputies to review Morales's resignation as well as an action plan during this period in the government led by Anez was forced to be postponed due to lack of numbers of deputies required by law, as the absence of representatives from the ruling coalition Movement to Socialism (MAS).

The move came after the extraordinary session of the Bolivian Chamber of Deputies scheduled to take place earlier to consider Morales's resignation was postponed.

On the same day, Venezuelan President Nicolas Maduro called on the Bolivian army to restore power to President Morales after the leader arrived in Mexico for political asylum. According to President Maduro, the current situation in Bolivia could lead to a civil war and its military officials need to be cautious about their actions.

On November 12, the Bolivian Labour Centre (COB) threatened to hold a general strike nationwide if political and civilian leaders failed to take steps to restore social order after President Morales was forced to resign under pressure from the army, police and protests launched by the opposition.

On November 12, the US Department of State issued a warning to US citizens not to travel to Bolivia while limiting the diplomatic presence in the South American country due to the instability there. The State Department said that protests, strikes and marches still take place in major cities in Bolivia, some of which were turned into riots.

Violent protests broke out again in Chile's capital, Santiago, on November 12. More than 80,000 people took to the streets to take part in a large-scale rally organised by 100 organisations in Santiago. Protesters demanded that Chilean President Sebastian Pinera resign or carry out more extended social reforms. Clashes have occurred between extremist protesters and security forces near the presidential palace. Meanwhile, the country’s domestic currency dropped to its lowest level in history.