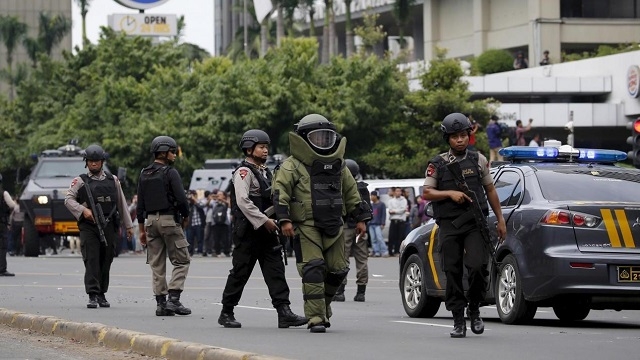 On November 16, Turkey announced that it will repatriate Islamic State (IS) jihadists detained in the country, with most of them being from Europe, according to Vietnam News Agency and foreign sources.

Indonesian police bomb squad members walk to the site of a bomb blast at Thamrin business district in Jakarta, Indonesia, in this file photo from January 14, 2016.

Ankara began by banishing a German and an American, while also announcing that it will expel 23 others, from Ireland, Germany, France and Denmark, in the coming days.

★ On the same day, Reuters quoted the Turkish prosecutor’s office as saying that local authorities had arrested 25 relatives of dead IS leader Abu Bakr al-Baghdadi. These people were arrested in the provinces of Kırşehir, Samsun, Ordu and Şanlıurfa.

The news comes nearly two weeks after the announcement from Turkey-backed militias in Syria on the arrest of Rasmiya Awad, the sister of Baghdadi, and the returning of the subject to Turkey.

★ German prosecutors said that the country had also arrested a woman of German nationality returning from Syria, suspected of having an IS relationship. The object is Nasim A., being expelled from Turkey with another woman. After landing at Frankfurt airport, the subject was immediately arrested and scheduled to appear before the German Federal Court.

★ On November 17, the Indonesian National Police said that its anti-terror task force had just arrested a dangerous element linked to the international terrorist network. The suspect, alias "WJ," was arrested in the city of Depok, West Java province. WJ is a bomb, explosives and weapon maker who joined training for an Islamic rebel group in southern Philippines and had been to Syria in 2012.

★ The Security Service of Ukraine - SBU has reported the detention of Al-Bara Shishani, a senior member of the IS, described as the terrorist group’s "minister of war" by the US Pentagon, after he used a fake passport to travel to Ukraine.

Shishani, a Georgian national, was arrested in a joint campaign between the Ukrainian security forces, the Georgia's Interior Ministry and the US Central Intelligence Agency (CIA).