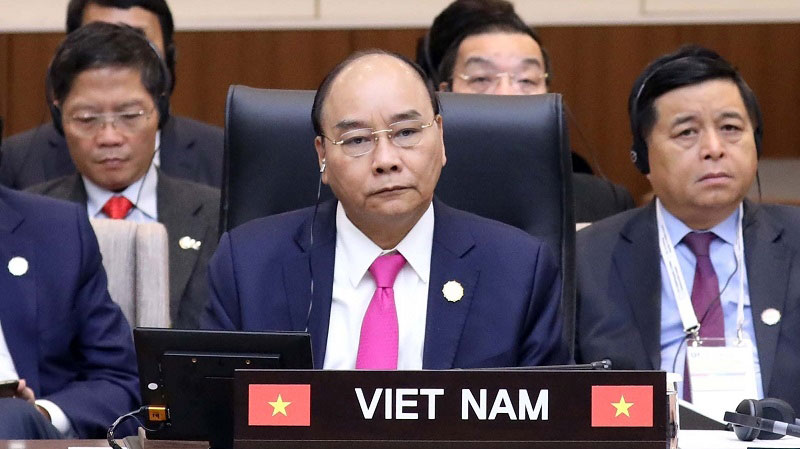 Prime Minister Nguyen Xuan Phuc suggested increasing strategy in the partnership between the Association of Southeast Asian Nations (ASEAN) and the Republic of Korea (RoK) while addressing the first working session of the 2019 ASEAN-RoK Commemorative Summit in Busan on November 26.

While proposing some major orientations for ASEAN-RoK cooperation in the next three decades, the Vietnamese leader stressed the respect for international law and an open, inclusive, transparent and rules-based regional architecture.

The two sides should step up economic collaboration towards equality and mutual benefits, and facilitate the flow of each other’s goods and investments in the respective markets, he said.

PM Phuc called on the RoK to admit labourers from ASEAN member countries, including Vietnam, and support them to get acquainted with the host society.

The PM stressed the significance of ensuring peace, security and stability in the region, saying maintaining security, stability, safety and freedom of navigation and aviation in the East Sea is the shared interest of all countries.

He appealed to the RoK to back the grouping’s stance and principles, while highlighting the respect for international law and the 1982 United Nations Convention on the Law of the Sea, dialogue enhancement, trust building, the implementation of the Declaration on the Conduct of Parties in the East Sea (DOC), and negotiations on a Code of Conduct in the East Sea (COC), thus maintaining the East Sea as waters of peace, stability, cooperation and free trade.

At the working session, the participating leaders shared the views that the ASEAN-RoK partnership has developed remarkably over the past 30 years across spheres, ranging from politics-security to economy, culture, social affairs and people-to-people exchanges. The RoK is one of the ASEAN’s leading important partners.

ASEAN leaders lauded the RoK’s New Southern Policy and Korean President Moon Jae-in’s efforts in strengthening relations with the ASEAN in the three pillars of peace, property and people.

They called on the RoK to further assist the grouping in enhancing connectivity and building the ASEAN Community, back its central role and actively participate in mechanisms led by the ASEAN aiming to promote dialogues and build trust.

They also called for the RoK’s cooperation in coping with non-traditional security challenges effectively, thus contributing to maintaining peace, security and stability in the region.

The two sides agreed to beef up trade and investment ties, optimise economic benefits brought about by the ASEAN-RoK Free Trade Area, and strive to raise the bilateral trade to US$200 billion in 2020.

They will also join hands to promote economic liberalisation and connectivity and make efforts to sign the Regional Comprehensive Economic Partnership agreement in 2020.

President Moon announced some cooperation initiatives with the ASEAN such as improving the visa system for ASEAN citizens to the RoK, doubling scholarships to ASEAN students, establishing the ASEAN-RoK startup partnership, supporting startups in new technologies, building the ASEAN-RoK industrial innovation centre, and further supporting the ASEAN in digital technological development.