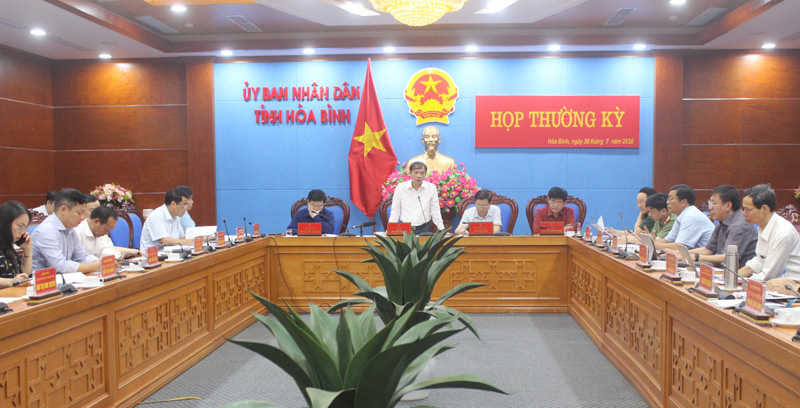 Bui Van Khanh, Deputy Secretary of the Party Committee and Chairman of the People’s Committee of Hoa Binh province, concludes the working session.

Delegates looked into a draft report reviewing the three-year implementation of action programme No. 14/Ctr-TU dated August 30, 2017 of the provincial Party Committee on the implementation of Directive No. 13-CT/TW of the Party Central Committee’s Secretariat on enhancing the Party’s leadership in forest management, protection and development.

Pointing to the low rate of public investment disbursement in the locality, the delegates agreed on the need to adopt specific solutions and take stronger actions to push ahead with the work.

Given the complexity of the latest COVID-19 outbreak in the country, they said each sector and agency need to promptly devise plans on pandemic combat while maintaining socio-economic development, and suggested closing tourist sites in the locality.

Speaking at the meeting, Khanh urged agencies and investors to work harder to accelerate public investment disbursement, adding that as from August, the People’s Committee will hold weekly working sessions on the work.

With nearly 880 people returning from Da Nang, home to the latest COVID-19 outbreak, Khanh ordered departments and agencies to intensify the communication work in order to raise public awareness of the disease.

Other tasks include tightening pandemic prevention and control measures and preparing machinery, equipment, medical supplies and vehicles in response to the disease, he said.

Khanh said the upcoming high school graduation exams must be organised strictly, while ensuring safety in the context of the COVID-19 outbreak./.